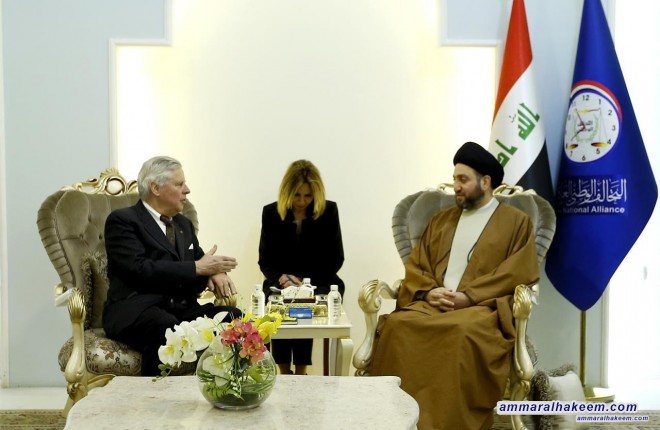 Head of the National Iraqi Alliance, Sayyid Ammar al-Hakim, in his office in Baghdad, received delegation of the European Institute of Peace which is visiting Baghdad Saturday 3/3/2018.
‎His eminence with the delegation discussed the stage of consolidating democracy that is complementary to the phase of its establishing democracy made in the previous phase.
His eminence praised efforts of the European Institute of Peace in supporting stability in Iraq, stressed that 2005 elections paved the way for the phase of building democracy, while the 2018 elections will consolidate democracy, pointed out that Iraq is close to shift from from instability to stability.
His eminence pointed out that Iraq has achieved three victories, the first of which is the military victory over Daesh, the second political victories over challenges faced national unity and the third is the societal victory over sectarianism and internal conflicts, pointed to the necessity of the fourth victory over the challenge of building the state, which will preserve and coronate the victories achieved.
Sayyid Ammar al-Hakim indicated that the current phase requires building a strong state capable of providing services and building institutions, stressed the importance of free and fair elections without discrediting, and running for elections based on competitive programs and achievements.