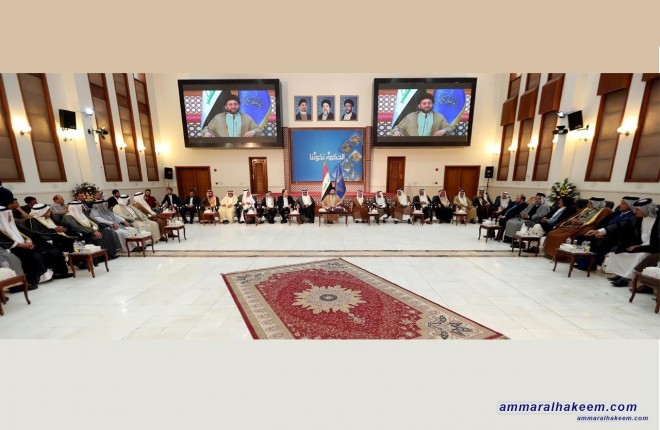 Head of the National Iraqi Alliance, Sayyid Ammar al-Hakim, in his Baghdad office met with a group of tribes of north of the capital Baghdad Saturday 31/3/2018
His eminence stressed the need for political powers whose is Iraqi sovereign decision, pointed out that the problem of services is not funding, but lack of plan and vision to provide services, stressed the need to adhere to the national option and prevent the return of sectarianism.
His eminence, praised the heroic stand of these tribes in protecting the security of the capital Baghdad from the Daesh attack, and their important role in fighting terrorism and quarantining sectarianism.
His eminence urged the need to re-examine the possibility of opening blocked roads and bridges, with taking into account the security requirements, noted that sectarian slogans do not deceive the people, because these sectarian slogans brought Daesh, terrorism and extremism and when sectarianism ends, terrorism will end, adding that "patriotism is not a slogan but a behavior, culture and independence of decision”, and emphasized the decision should be pure Iraqi and needs political powers that have an internal Iraqi sovereign decision and evokes the national interest, stressed the importance of protecting Iraq from axes of politics.

His eminence pointed out that the countries are built with plans, programs and the competent team capable of achievement, and to support building a strong state, without discrimination between citizens, and to be fair to citizens, provide services and establish coexistence with the countries of the region and the region, and improve relations, and revive agriculture and industry, and become a prestigious state, noted that the problem of services is not funding, but lacks plans and vision, indicated "We have men who are capable of building the state," called for the election of personages who are efficient, fair and capable of making changes.