Sayyid Ammar al-Hakim to British ambassador .. the only solution to regions’ issues is dialogue and avoiding escalation 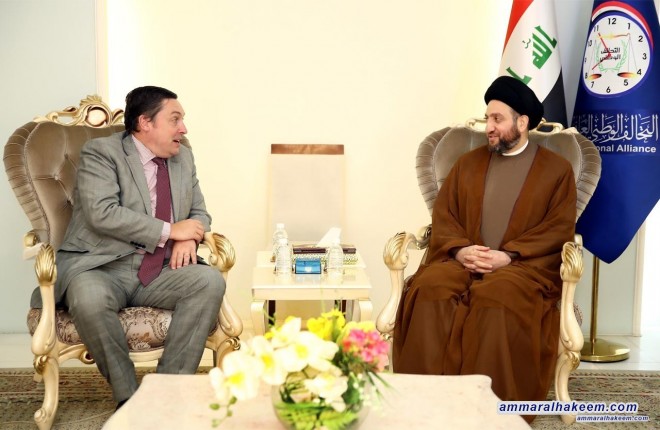 Head of the National Iraqi Alliance, Sayyid Ammar al-Hakim, in his office in Baghdad received the British ambassador to Baghdad, Jonathan Powell Wilkes Thursday 5/4/2018
His eminence with Wilkes discussed the political developments at regional and international levels, and the bilateral relations between the two countries, stressed that only dialogue can solve the issues of the region, and called to avoid escalation that will increase people's suffering.
His eminence indicated that escalation will make the region lose great opportunities comparing to cooperation to achieve security and prosperity for the peoples, pointed out that a stable, developed and prosperous Iraq will have a positive and effective role in addressing region’s issues considering Iraq suit for being a bridge of communication and not a battlefield.
Regarding the upcoming Iraqi elections, his eminence affirmed that it is decisive and critical, and will shift the country from instability to stability, stressed the necessity of winning in state-building challenge to be the culmination of military, societal and sectarian victories.