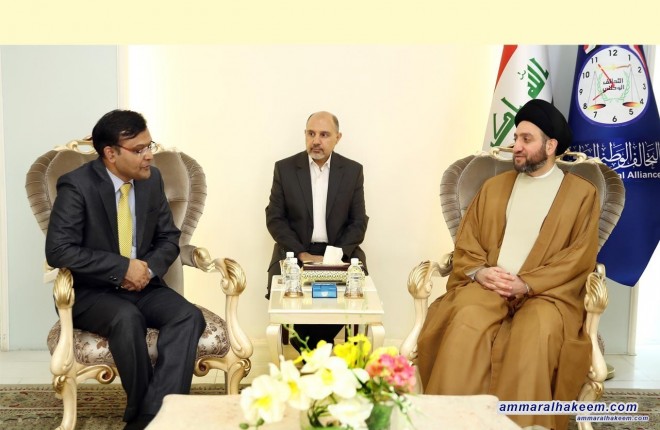 Head of the National Iraqi Alliance, Sayyid Ammar al-Hakim, in his office in Baghdad, received Indian Ambassador to Baghdad Pradeep Singh Rajpurohit Monday 23/4/2018
His eminence with Pradeep discussed bilateral relations and the prospects for relations development, pointed out that Iraq seeks to establish the best relations with world’s countries based on its national interest, highlighted the roles that Iraq can play in the region and the world, and in convergence of views among parties and rivals.
Regarding the upcoming elections, his eminence indicated "elections are a turning point and will shift Iraq to stability phase”, pointed out the importance of competing on the basis of programs and winning the challenge of building the state and institutions, called on the countries of the world to continue support Iraq as Iraq’s stability is a portal to stability of the region and the world.