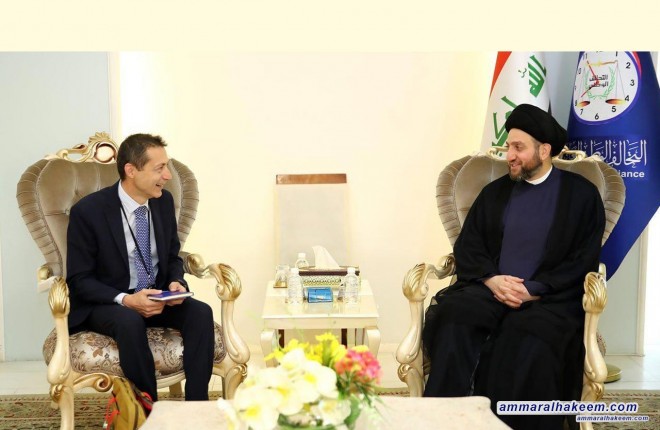 Head of the National Iraqi Alliance, Sayyid Ammar al-Hakim, in his office in Baghdad received head of European Union Election Observation Mission Wednesday, 25/4/2018
His eminence discussed with them the upcoming elections and the course of democracy in Iraq. His eminence indicated that multiplicity of parties and the large number of runners an unhealthy situation, but at the same time reflect openness and the democratic situation which will be consolidated in the 2018 elections.
His eminence highlighted principles of the Al-Hikma National Movement; moderation, patriotism, youth support, women's empowerment, state-building and clear programs and projects, pointed out that the Al-Hikma Movement presented 549 candidates of which 90% participated for the first time, 45% under 40 year old of age and 96% are higher education graduates.

His eminence pointed out that the electronic electoral card is an important step in the right direction to reduce fraud, warning of the impact of money used for political influence on the electoral process, called for a serious stand to support the elections project.