Sayyid Ammar al-Hakim to McGurk: The government of the national majority met with a national opposition is the best solution for the next phase 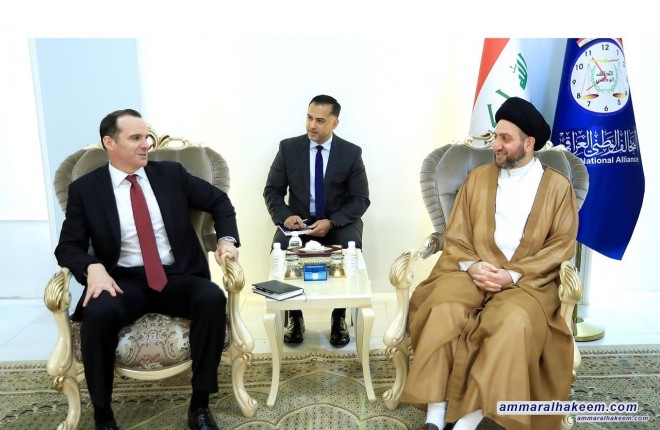 Head National Iraqi Alliance, Sayyid Ammar al-Hakim, in his office in Baghdad , met with US President Envoy, Mr. Brett McGurk and delegation Saturday 7/7/2018
His eminence stressed the importance of forming a national majority government representing all components of the Iraqi people. And explained that the existence of a national majority government that takes care of all components performing according to a clear and time-bound program, met with a national opposition to monitor and rectify government work, will be a solution for the next phase, in which will strengthen Iraq’s pivotal role in defusing the crises that are afflicting the region and contribute to the stability of its countries.
McGurk indicated that the United States supports Iraq in forming a government with an Iraqi will, and Washington will urge the international community to continue supporting Iraq. And praised the role of the Head of the National Iraqi Alliance in uniting ranks and move to form the next government.