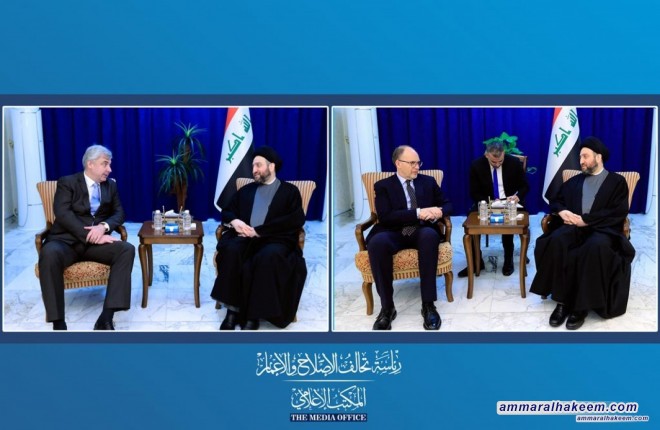 Head of the Reform and Reconstruction Alliance, Sayyid Ammar al-Hakim, in his office in Baghdad, received US Ambassador, Mr Douglas Silliman, and Russian ambassador, Mr. Maxim Maximov in separate meetings Monday 3/12/2018
His eminence discussed latest developments in the political situation in Iraq and the region, stressed the importance of completing the government cabinet, and strengthening bilateral relations between Iraq and the countries of the world, and assign competent and honest ministers that have management capacity.
His eminence emphasized on independence of the Iraqi decision and proceed with positives achievments, his eminence called to adopt dialogue as the optimum means to solve issues, reiterated his rejection to the policy of starving peoples and force sanctions, and urged the international community to assume responsibilities in supporting Iraq by reconstructing liberated cities and cities of liberators, stressed the need to seriously handle the threat of terrorism and that the security of Iraq impacts the security of the region and vice versa.