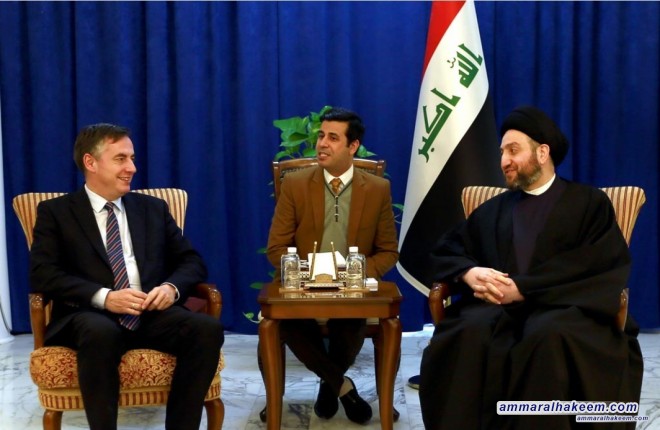 Head of the Reform and Reconstruction Alliance, Sayyid Ammar al-Hakim, in his office in Baghdad, received delegation of the European Parliament headed by, Mr. David McAllister Chairman of Foreign Affairs Committee, meeting was also attended by the a number Alliance leaders Tuesday 18/12/2018
His eminence with the delegation discussed latest political situation in Iraq and bilateral relations between Iraq and the countries of the European Union, his eminence stressed that Iraq has presented a model in the peaceful transfer of power, rotation of roles, consolidation of democracy and the adopting of the voices and choices of the people, emphasized on completing the government cabinet to start implementating governmental program.
His eminence stressed excluding Iraq from any regional and international defiance to protect the interest of Iraq, pointed out that Iraq is qualified by virtue of its location and diversity to be a bridge of communication and not a stage for intersection, reiterated rejection of the siege and starvation policy against peoples, called to adopt dialogue, compromising and meeting half way to resolve issues.
Regarding Daesh, his eminence stressed on the developmental, economic, social and security resolutions to eliminate Dahesh ideology, and urged the international community to shoulder its responsibilities in this regard.