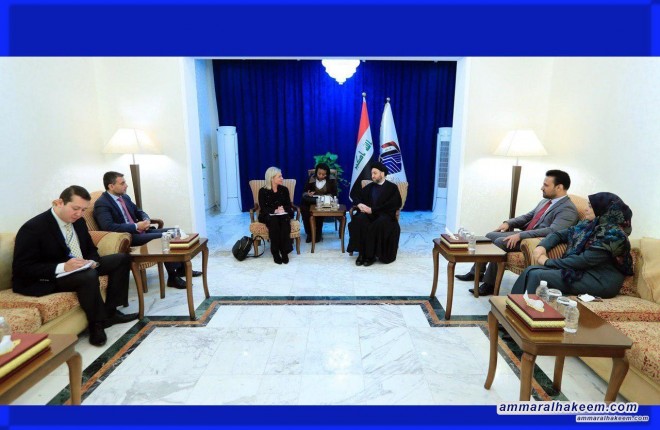 Head of the Reform and Reconstruction Alliance, Sayyid Ammar al-Hakim, in his office in Baghdad received the representative of the UN Secretary-General in Iraq, Mrs. Jeanine Hennis Plasschaert Sunday 24/12/2018
His eminence with Plasschaert discussed latest developments in the political situation in Iraq and the region, and also discussed forming the government and the role of the United Nations in supporting Iraq. And congratulated Ms. Plasschaert for assuming the position in representing the United Nations in Iraq and wished her successful mission.
His eminence stressed on the need for concerted efforts to consolidate social harmony among the Iraqi people and to address with the effects of wars and conflicts in Iraq, and the need to expedite completing the ministerial cabinet and the selection of competent ministers capable of carrying out their responsibilities with transparency and professionalism to make the government able of implementing the governmental program and improve service and development situation in Iraq as it is a top priority.