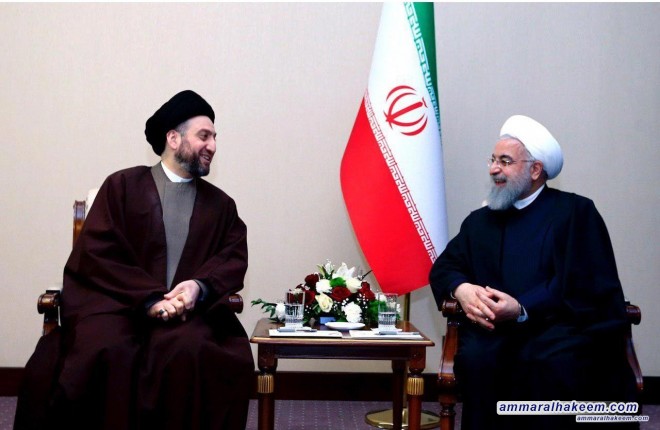 Head of the Reform and Reconstruction, Sayyid Ammar al-Hakim, met with the President of the Islamic Republic of Iran, His Highness Sheikh Hassan Rouhani in Baghdad March 12, 2019
His eminence with Rouhani discussed bilateral relations between Iraq and Iran and ways to develop relations at political, economic and social levels.

His eminence commended the role of the Islamic Republic of Iran in supporting Iraq in the fight against terrorism, noted the importance of the two countries in the regional system, and mutual importance of Tehran to Baghdad and vice versa on terms of overlapping security system.

His eminence reiterated Iraq's rejection of unilateral sanctions against the Islamic Republic of Iran, which is a dangerous precedent in international relations and aim at starving and besieging peoples, called for adopting dialogue in solving unsettled problems.

His eminence indicated that Iraq has taken the position of positive neutrality, and distance from the policy of regional and international axes, and Iraq is qualified to play the role of mediation between the regional key players.

His eminence highlighted the political changes in Iraq, the success of elections and assigning an independent personage to run the government and granted the power from some blocs to appoint independent ministers, plus forming unbiased alliances, and stressed that alliances would be able of resolving political crises if , and called all to understand the nature of the changes in Iraq.