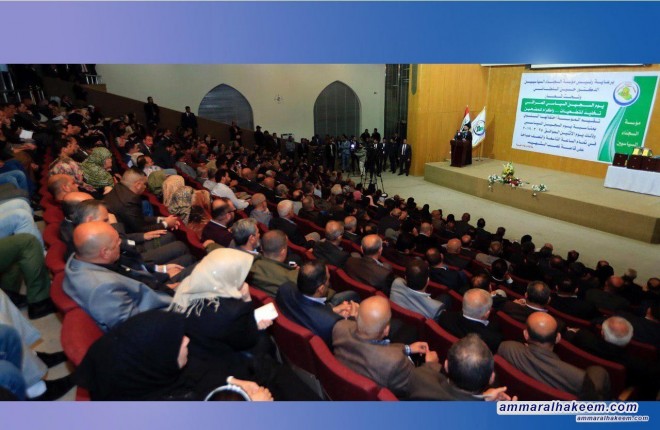 Head of the Reform and Reconstruction Alliance, Sayyid Ammar al-Hakim, in the annual ceremony of the Iraqi Political Prisoner, Baghdad Monday 25/3/2019, demanded to empower the political prisoners and give them full rights, called to momerialize and introduce the great sacrifices, and memorize the injustices suffered by the Iraqi people under the decorator regime. And deplored using strongest terms the attempts of the usurping Zionist regime to annex Golan.

His eminence reiterated the importance of defending the national project and adhere to it, and bearing some difficulties, urged to support this project to become a reality, "There is no unified Iraq without a national project, no strong Iraq or a strong state without that project."

Pointed out that the sacrifices of political prisoners and their memories is not limited only to them alone, but rather a wealth of the nation, the people and the peoples, which is proud of its history, noted that a few prisoners wrote their memories. This is not enough to define the era, especially that 70% of the Iraqi people are under 30 years old with no memory of the dictator and do not know anything about the past, the facts must be kept loud, stressed the need to start museums to reflect the conditions experienced by the prisoner.

His eminence stressed the importance prioritizing and privileging political prisoners and families of martyrs over others, based on subjective Islamic and Qur'anic approach, as a segment of people who had sacrificed and endeavored, and must have moral acknowledgment. Noted that women prisoners represents an important subject, and their suffering is greater than men by virtue of women composition and their moral identification, women should have a positive identification and support, stressed the need to develop skills and capacity and   on going training to enable the political prisoners to be productive amongst changes experienced by Iraq.

In another subjects, his eminence pointed to the importance of investing regional and international openness, and visits of kings and presidents to Iraq for concluding agreements, stressed that Iraq's interest is to remain a bridge to link interests of countries and a battlefield, the interest of Iraq si lies in being positive with all away from alignments.
Regarding international and regional issues, his eminence deplored in the strongest terms the attempts to annex Golan Heights to the Zionist entity, stressed that biting of lands of the Muslims and annexation to the usurper entity is supported by large countries, and demanded on those countries to desist from attempting to clash with the feelings of Muslims and Arabs, as it will conflict with its interest, And that Golan and Palestinian are arab, rights are not subject to statute of limitations.