Sayyid Ammar al-Hakim emphasizes to Russian ambassador Iraq's distance from policy of axis, and Russia have to have a role in consolidating region's situation 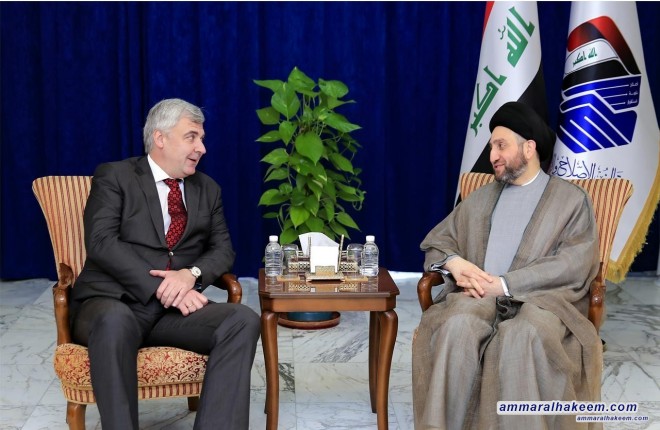 Head of the Reform and Reconstruction Alliance, Sayyid Ammar al-Hakim, in his office in Baghdad received the Russian Ambassador to Baghdad, HE Maxim Maksimov Monday, April 29, 2019
His eminence with Maksimov discussed latest developments in the political situation in Iraq and the region, means of enhancing bilateral relations specially on economic, agriculture and commercial levels. Discussions also covered the role of Russian in investment in Iraq, and support the government in resettlement of the remaining displaced families and provide the necessary services for them.

Sayyid Ammar al-Hakim also reiterated that it is necessary for Iraq to be distanced from the policy of axes, intervention to Iraq's internal affairs by other countries, exploit the exceptional circumstances that Iraq is going through making Iraq a path to attack other countries. His eminence also stressed that Russia take its role in stabilizing situations and resolving problems between countries of the region.
The Russian ambassador commended holding Summit for Parliaments of Iraq Neighboring Countries in Baghdad, considered it an important step for rapprochement and improving relations between Iraq and its neighbors, stressed the necessity of Iraq attending the (Astana) negotiations because of Iraq's big role in maintaining a balance in the region.