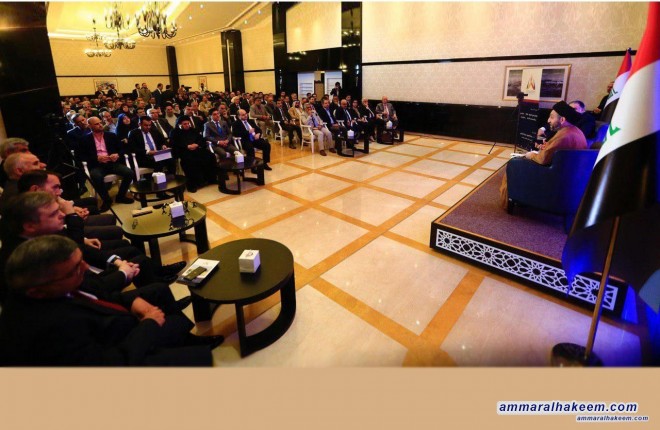 Head of the Reform and Reconstruction Alliance, Sayyid Ammar al-Hakim, attended a dialogue session held by the Rafidain Center for Dialogue on Political Reform and the challenges facing it, and stressed that "any reform process without a clear vision, can not be productive. The political reform and developing political system must commensurate with the volume of developments and emerging updates, and if the new constitution sets a new philosophy, the legislation is the same legislations of the former regime, therefore it must be reviewed and modified in line with our new realities".

Sayyid al-Hakim also stressed that "the reform should be characterized by seriousness, radicalism, inclusiveness, gradualism, sustainability and specialization, and the need to stir up enthusiasm in the society towards real reforms, rather than slogans, and building a political and social alliance that bears the responsibility of reform. It is also necessary to develop a strategic vision for reform and convey the reform vision to the society with swift gains to reassure citizens".

His eminence also stressed on reconsidering the state structure, and building new institutions that are consistent with the reform steps. "The rigid perspective to the administrative system in the country needs serious review to achieve a real administrative revolution, the political base that carry the government should be present fot it is the incubator on which the government lean to when its presence is jeopardized".

Sayyid al-Hakim also stressed that the "real criteria for the success of the service program offered by the government is the popular and elitist impression towards the implementation of this program. It is necessary not only to form the Supreme Council for Combating Corruption, but also convince the people that there is a clear and concrete plan to combat corruption, through actual remedies for corruption practices that still continues to worsen".