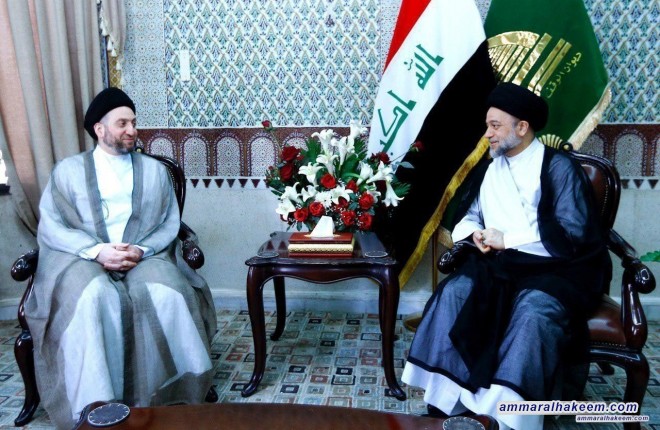 Head of the Al-Hikma National Movement, Sayyid Ammar al-Hakim, met with head of the Shiite Endowment, his eminence Sayyid Alaa Al-Mousawi, in the office of the latter Baghdad 15/07/2019
His eminence visited Sayyid Mousawi to check on his safety after the recent incident, pointed out that the unjust attack targeted the state in one of its institutions. And considered the attack against security and social peace.
His eminence called on the government to arrest the perpetrators and bring them to justice, and reveal results of the investigation to the people to make the public opinion feel stability and reassurance and that paths to consolidate peace and security are moving in the right directions, and reiterated wishes to Sayyid Mousawi of safety and success in assuming performance his duties.
Head of the Shiite Endowment called upon the pro-government and opposition powers to cooperate and collaborate in preserving the prestige of the state and respect the law. Sayyid Ammar al-Hakim appreciated Sayyid Mousawi's feelings and wishes for the Al-Hikma National Movement after announcing constructive national opposition.