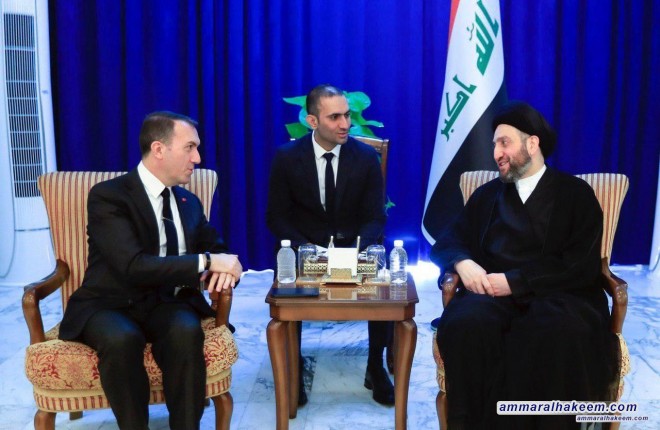 Head of the Al-Hikma National Movement, Sayyid Ammar al-Hakim, in his office in Baghdad, received Turkish Ambassador to Iraq, HE Fatih Yıldız. His eminence with Yildiz discussed Iraq's relations with Turkey and ways of developing them at all levels, in addition to developments of the regional and national political scene.

His eminence stressed that Iraq seeks to build constructive and good relations with everyone taking into account common interests, indicated the importance of supporting pacification and dialogue to resolve the problems of the region, and the need not use language leading to escalation by all parties and resort to peaceful solutions.
His eminence renewed his emphasis on continuing in the path of the political opposition project, pointed out that the opposition has made strides in building the project and everything related to it such as forming the National Opposition Front, the shadow government and preparation of parliamentary interrogation files for a number of government ministers.