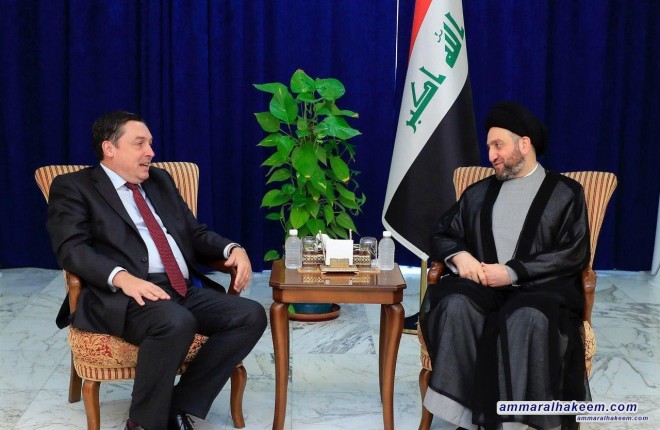 Head of the Al-Hikma National Movement, Sayyid Ammar al-Hakim, in his office in Baghdad, met the British Ambassedor, HE John Wilkes 30/10/2018
His eminence called for necessity to respond to fair demands of the demonstrators and protect the peaceful demonstrations, stressed the need to prosecute infiltrators and and who are offensive to the demonstrations.
His eminence stressed that demonstrating is a constitutional and legal right and one of the components of the democratic system, and the most important tool to rectify the course, emphasized that security services have a responsibility to keep the security of demonstrators, maintain public and private property, and pursuit infiltrators and who offense the peaceful demonstrators and demonstrators. And called to respond to the fair demands of the demonstrators and that the Parliament, the judiciary system and political powers should shoulder their responsibilities.
His eminence also called to maintain bilateral relations between Iraq and the United Kingdom in a way that serves the interests of all. And stressed on openness to all based on common interest. Meeting also covered developments in the situation in Iraq and the region, and his eminence wished Ambassador Wilkes success in his next mission and appreciated his role in representing his country in Iraq during the past period of time.