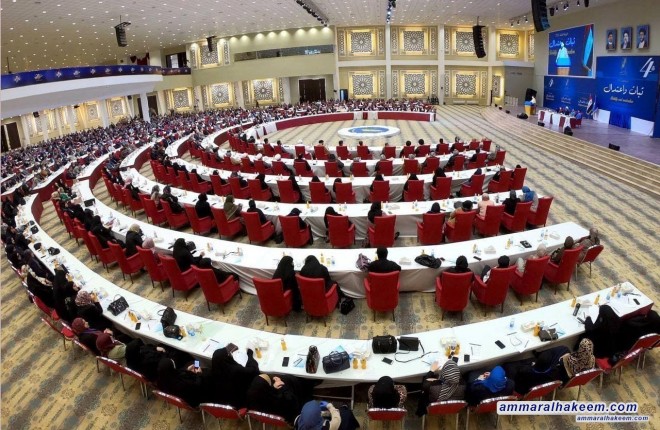 Sayyid Ammar Al-Hakeem, head of Al-Hikma National Movement, illustrated in the 4th annual conference of the General Assembly of the movement on Saturday, April 3, 2021, the nature of the pivotal phase that Iraq is going through. Iraq has overcome six challenges, yet has six more challenges ahead, and stressed the importance of choosing between the paths of stability and instability. Everyone tried the lonesome path and experiences have proven that this failed, which contributed to everyone's desire to cooperate.
His Eminence said that the world is experiencing major challenges and that the political priorities of countries concerning Iraq and the region are no longer the same as the priorities of the previous stage. Iraq is in a state of ascension through the roles it plays in converging views regionally and internationally. Investing in its own capabilities and the absence of actors capable of bringing views closer. Detailing the challenges Iraq has overcome. The challenge of the occupation legislated by international resolutions and the challenge of sectarian strife, as Iraq was desired for it to enter into a fierce sectarian war, but with the efforts of the supreme religious authority and wise people from all components, we have overcome the sectarian crisis. The third challenge that Iraq has overcome was the challenge of terrorism and making Iraq a cornerstone of destabilization to the security and stability of the region and an epicenter of extremism and intransigence, while Iraq overcame the challenge of partition and the collapse of the political system in the fourth and fifth challenges, and overcame fears of returning to tyranny and single-thought theory in the sixth challenge.
Concerning the challenges facing Iraq in the coming stage, His Eminence said, “The first challenge is to preserve the achievements made by completing Iraqi sovereignty with the exit of foreign forces that returned at an Iraqi request, recalling its three plagues: “No to combat forces in Iraq, no fixed bases, and no interference in Iraqi affairs.” Among the six challenges facing Iraq in the forthcoming phase are; preserving the country's unity, preventing the return to sectarian strife, preserving the security achievement, the traditions of democracy, freedom of expression, and the peaceful transfer of power.
His Eminence referred to the second challenge, the challenge of building the Iraqi nation through converging on the national project and the national interest, while the third challenge is the challenge of building the state and ending the state of confusion and fragility that has accompanied the Iraqi state since its founding. While the third has a connection to the economy and redistributing income sources and invest in potentials.
Reiterating his call for an administrative revolution, his words on the fifth challenge, the challenge of administration and service, pointing out that the sixth challenge is Iraq's ability to create a state of balance in foreign relations and adopt positive neutrality through interacting and look for solutions without Iraq being a party to problems and conflicts.
His Eminence mentioned that Al-Hikma proposed solutions and projects for all the challenges facing Iraq, as he called for a new social contract that paves the way for and helps in forming a new political contract that is acceptable and not imposed by society. He also proposed the idea of managing diversity by investing in Iraq’s foreign relations, pointing out that Al-Hikma proposed the project of the cross-component to end the chaos and reassure everyone, as he emphasized the separation between state and non-state powers.Electively, His Eminence urged the members of the General Assembly to unify ranks, introduce the project, provide service to the general public, work with a team spirit, openness to society, and spread a culture of dialogue, moderation, and field movement. He also stressed biometric modernization and mobilizing energies.