Sayyid Ammar Al-Hakeem meets sheikhs and dignitaries, recalling the history of the city and its sacrifices during his visit to Tuz Khurmatu 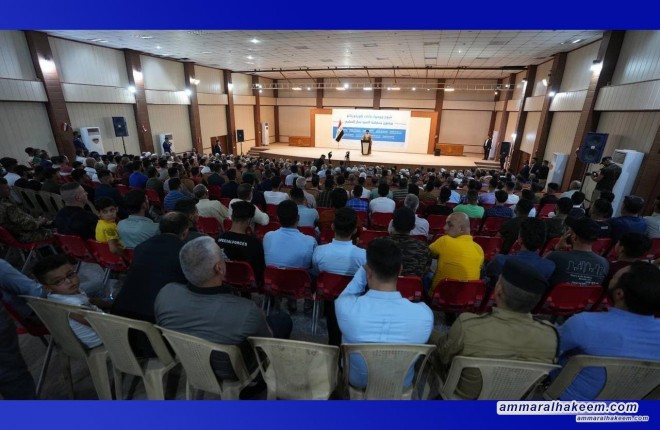 Sayyid Ammar Al-Hakeem, head of the National State Powers Alliance, met a group of sheikhs and dignitaries of the city. Saturday, June 5, 2021, during his visit to the district of Tuz Khurmatu, and recalled the history of the city and its sacrifices and the historical relationship with the people of Tuz Khurmatu and the special interest in it, and the affection and love of its people.
His Eminence indicated the sacrifices of the people of Tuz Khurmatu in fighting the dictatorship and sacrificing a lot of martyrs for the sake of Iraq and its people, such as martyrs Sayyid Jaafar Al-Musawi and Abbas Chuma, "May Allah’s Mercy Be Upon Them." Referring to the sacrifices made in fighting terrorism with its various names and addresses, noting that the challenges increase the stability and steadfastness of the people of Tuz Khurmatu until it became its title.
His Eminence pointed out that standing with the martyrs of Tuz Khurmatu is a source of pride and honor for our people, who sacrificed so much for the sake of their homeland. As His Eminence indicated, the steadfastness of Tuz Khurmatu proved the failure of the idea of exclusion and marginalization of any component because it contradicts the most expressive societal reality of the Iraqi nation.
His Eminence reiterated that the transitional period that followed the fall of the dictatorship is nearing its end, and there is a will to get Iraq out of its crises and end its suffering. The Pope’s visit to Iraq and the regional dialogues that are taking place in Baghdad are all evidence of Iraq’s restoration of its leading role, as well as the acceptance of the conflicting parties on Iraqi soil by its transformation into an arena of encounter and debate.
His Eminence warned against calls to discourage and inhibit people from participating in elections for political purposes, while the people behind these calls go out to reap votes and seats, saying: Voting is a right and the vote is a trust, and a reassuring and balanced equation must be formulated through the ballot boxes.
His Eminence also clarified the nature of the relationship between broad participation in the elections and the legitimacy of the political system. The higher the participation rate, the more it expresses the cohesion of people around their political system.
His Eminence reiterated the warning of the effect of political money, weapons, and defamation campaigns in changing people's convictions, calling on voters to reject such methods because their owners will not be the true expression of people's aspirations.