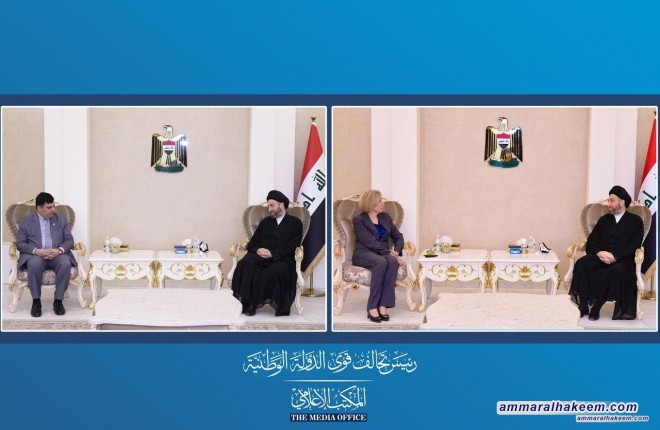 Sayyid Ammar Al-Hakeem, head of the National State Powers Alliance met in his office in Baghdad, the Australian Ambassador Ms. Paula Elizabeth Ganly, and Pakistan Ambassador to Baghdad, Mr. Ahmed Amjad seperatley on September 16, 2021.
His Eminence discussed with the Australian Ambassador the political scene in Iraq and the region, and the bilateral relations between Iraq and Australia, and ways to develop them to serve both the countries’ and the peoples’ interests. Stating that Iraq is nearing the electoral entitlement on October 10, and stated that it is fate-defining and crucial in Iraq’s history. All of its results should be balanced and serves the Iraqi interests as its core.
His Eminence stressed the importance of international observation over the elections and stated that more observers mean more transparency in the electoral practice. While also calling to complete the observers’ procedures.
The two sides discussed the results of the Opposing Violence Against Women conference and praised the international and diplomatic attendance, including the Australian. And added, the social laws must be balanced and should work to preserve the family and households as its main core.
His Eminence and His Excellency, Pakistan Ambassador to Baghdad, Mr. Ahmed Amjad Ali exchanged views on the developments of politics in Iraq and the region, and the bilateral ties between the countries, and the matters of common interests. His Eminence emphasized the importance of developing the relations between Baghdad and Islamabad in what serves the interests of the two countries. “It is imperative to invest in the commons of both sides and coordinate positions when it comes to fighting terrorism and extremist ideology.” His Eminence added. It is also important to sustain cooperation on these files and others.