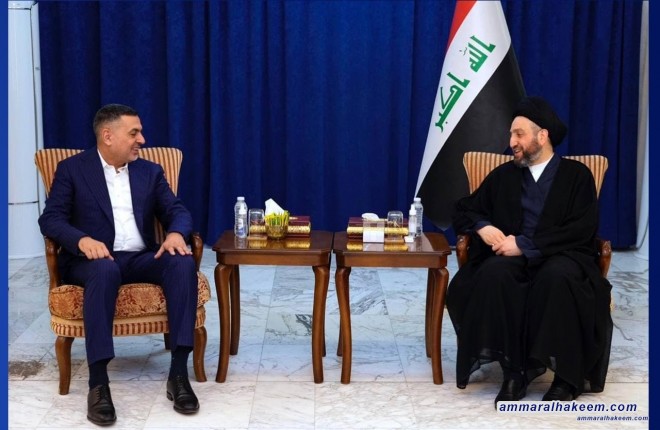 Sayyid Al-Hakeem, head of the National State Powers Alliance, met governor of Basrah Mr. Asaad Al-Eidany, with the presence of the head of Iraqi National Congress Mr. Aras Habeeb on Sunday, November 28, 2021, and discussed the unfortunate events in Basrah, its services reality, and the challenges that it faces, not to mention the political scene developments and the repercussions following the results of the elections.
His Eminence affirmed the necessity of elevating the service reality in Basrah to live up to its giving on all of the different levels. H.E. also called upon all to solve the water crises in Basrah, due to lack of rainfall and drought, through sustained and active projects.
Security-wise, His Eminence emphasized the necessity of preserving security stability and putting an end to clans’ disputes that take place from time to time.
Concerning politics, His Eminence renewed his position calling to pacify the street and prevent the state of political impasse, favoring Iraq’s interest and its people and achieving the aspiration of the people with a servant government that provides services and job opportunities.