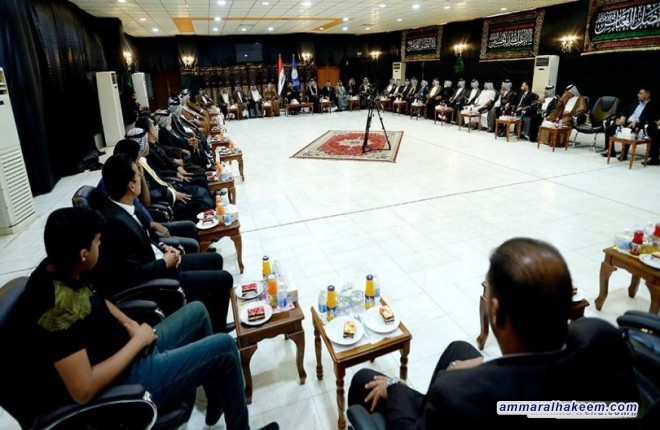 Head of the National Iraqi Alliance, Sayyid Ammar al-Hakim, in his office in Baghdad, received a delegation of elders and tribla figures of Al-Juheish tribes Saturday 7/10/2017,

His eminence described wrapping the coffin of former President Jalal Talabani with Kurdistan flag at the funeral a curtailment to President Talabani role before being a curtailment to Iraq, stressed that Iraq and Baghdad are bigger than what happened and are not to be subject to curtailment.

His eminence praised the great victories achieved by the security forces and the popular mobilization forces in Hawija, counted the victories a major shift in security equation and an end to terrorist Daesh groups, a legend of victory that amazed the world, and expressed his believe that Daesh as terrorist groups are over.

Regarding the issue of Kurdistan, his eminence renewed rejection of any dialogue without cancelling referendum results, indicated that the federal government is operating according to the Constitution and the law and its procedures in handling the Kurdistan region are constitutional, this is what put the world countries in a supportive position to Baghdad and Baghdad’s demands.

His eminence pointed that he recorded his admonishment to Kurdish parties for the surprise of wrapping Talabani’s coffin with the region’s flag, considered this step to minimize and curtailment to the great role of Talabani in maintaining Iraq and its unity.

His eminence stressed Iraq’s need for a national project which is comprehensive for all denominations and non-sectarian in nature, gathers all people of the country and works on a national program that seeks to find real services in the next phase, his eminence indicated that the Al-Hikma National Movement is determined to include all components in its General Conference.