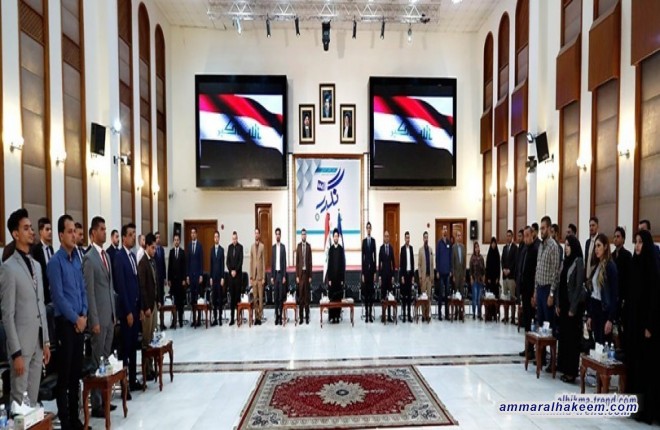 Head of the National Iraqi Alliance, Sayyid Ammar al-Hakim, in his office in Baghdad met with members of the Youth Parliament at its third session Monday 9/10/2017.

His eminence called to build a state of citizenship and to perpetuate the concept of patriotism, noted the importance of taking the challenges of 2017 into consideration.

His eminence praised the high spirit, the scientific qualifications and high academic degrees of Iraqi youth, counted the youth the true capital and the real wealth of Iraq, because man is the foundation, pointed out that the human, youth potentials and the great wealth made Iraq a target of everyone's greed, but today Iraq is revered and apprehended, because Iraq defeated the most lethal and criminal dangerous gang known to humanity.

His eminence urged the youth to practice political work by being involved under a political entity to take roles and reform it from within when the youth have observations on their performance, explaining that the law of the parties allows the formation of political entities under any principle agreed by the youth people, stressed that political action is what gives roles in any democratic political system and the levy of these roles are confrontation and bear toppling and jostle.

His eminence called on Iraqi youth to evoke the national concern. If the country issues are handled, then secondary, minor issues and private problems will be resolved, warned of continuous attempts by some to create crises for political gains and private gains.

Regarding the current political situation, his eminence stressed that unity of Iraq is a red line that is not to be ignored or compromised, and the constitution is a reference to solve the issues, stressed holding elections on the scheduled time for it is one of the most important pillars of democratic practice and political course of action.